McLaren team principal Andreas Seidl has been left unsurprised by Ferrari‘s late-season resurgence due to the power and resources at the Scuderia’s disposal.

McLaren, Racing Point and Renault have been involved in a season-long three-way battle over third place in the constructors’ championship.

Heading into the Turkish Grand Prix, a point separated the three rivals but following a chaotic weekend, Racing Point now has a five-point margin to McLaren, with Renault 13 points further back.

Ferrari, who entered the weekend looking more likely to drop behind AlphaTauri than join the battle, defied the odds to secure third and fourth places in the race and close to within six points of Renault.

Addressing the Scuderia’s remarkable recovery, Seidl said: “[I’m] Not worried or concerned, I am just realistic. 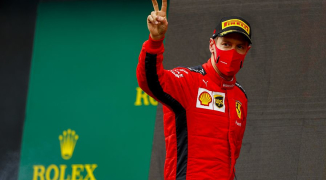 Is Vettel back to his best after Turkish GP podium?

Vettel sees a younger version of himself in “good kid” Leclerc

“I know what a team like Ferrari, with the resources they have can do, and it is no surprise they are coming back during the season.

“We never underestimated the power that Ferrari has, they have two great drivers also and are obviously a great team. That is the reality we are in.”

With Mercedes wrapping up both the constructors’ and drivers’ championships, and with Red Bull secure in second place, the fight for third has become one of the more intriguing contests going into the season-ending Middle East triple-header.

Seidl is hopeful McLaren can take it to the wire, which in itself would be a remarkable achievement considering the position of the team a year ago.

“It is important to focus on ourselves and extract the maximum from what we can do with everything we have,” insisted Seidl.

“But at the same time, we have very strong competitors. We just hope we can keep this battle alive until the last race and we will give it our all as a team.

“I see how committed everyone is inside the team, how great the spirit is in the garage and back home and it gives me a lot of confidence that we can keep this battle alive.

“At the same time, independent of the outcome of this championship, it is important we clearly see we make progress as a team.”

Is Vettel back to his best after Turkish GP podium?