Ricciardo impressively held off the quicker Sergio Perez in the closing stages of Sunday’s race at the Nürburgring to claim his first podium since his win in Monaco in 2018, and the team’s first since the 2011 Malaysian GP with Nick Heidfeld.

Abiteboul, who had previously agreed with Ricciardo to get a tattoo if the Australian claimed a podium for Renault before his move to McLaren, reflected on the French team’s journey to Sunday’s success from their comeback into Formula 1 in 2016.

“I know there is this tattoo story but I don’t want to make that the story of the day,” Abiteboul told F1TV.

“The story of the day is clearly a milestone, a milestone in the journey of the team. 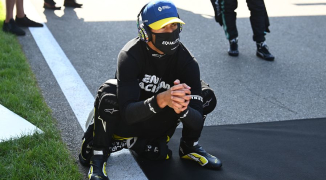 “Grandpa” Ricciardo ‘scared himself’ on the Nordschleife

Red Bull has an alphabet of options before calling Renault – Abiteboul

“We’re back as a complete team since 2016, it’s taken a while. There’s been lots of criticism of us. But [we have shown] commitment to the sport, also the capacity to progress, and finally to get into that position.

“Let’s be clear, also that position today was made possible because there was a retirement for Valtteri [Bottas].

“We know that our car is not capable in straightforward circumstance of doing that. But there is no doubt that we’re progressing and I see that as a small boost of energy for what’s to come next.”

Ricciardo, now fourth in the drivers’ championship, saw team-mate Esteban Ocon retire due to a suspected hydraulics issue with the RS20.

Abiteboul knows both Ocon and Ricciardo have it within themselves to lift Renault to third in the constructors’ championship.

“I think the consistency is really coming from reliability and good execution,” added Abiteboul. “I think frankly, the three cars [Racing Point, McLaren, Renault] are very close to one another.

“There would be some differences according to the track characteristic but we are very, very close.

“We all have a car that’s good enough for P3 so it’s very much who will be the most reliable and the best in execution on the races.”