Max Verstappen confessed he did not expect to qualify on the front row after being beaten only by Lewis Hamilton in qualifying for the Russian Grand Prix.

Verstappen had rarely shown signs that his Red Bull had the pace to compete with Mercedes in the early stages of the weekend in Sochi, but with his final Saturday run at the Sochi Autodrom, the Dutchman finally discovered the pace he needed.

“In Q3, the final run especially, it was not bad,” he said. “To be second on the grid, I did not expect. Very, very pleased with that.”

Reflecting on the struggle of the weekend up to this point, Verstappen added: “We were struggling a bit to find the right balance with the car on this track, it’s quite slippery around here.

“Even this morning, I was not entirely happy. Through qualifying, we were really working on trying to nail the balance.” 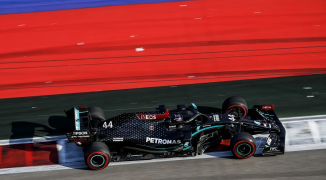 Given the nature of the long drag through Turn One and into the Turn Two braking zone, Verstappen is aware he may have an early opportunity to attack pole sitter Lewis Hamilton for the lead.

Starting on medium compound tyres, a contrast to the softs run by Hamilton, the Red Bull driver could also elect to play a longer game, but for now, his thoughts are focussed on the race start.

He added: “If we can have a decent start, the tow effect is very big around here. If we can get a good draft, who knows what is going to happen into turn 2.

“It’s going to be interesting anyway tomorrow with the tyres as well.”