Toyota has won its third consecutive 24 Hours of Le Mans as Kazuki Nakajima took the chequered flag in the #8 car at the Circuit de la Sarthe.

The victory is a third for Sebastien Buemi and Nakajima and a second for Brendon Hartley, the New Zealander replacing Fernando Alonso in the #8 car for 2020.

The #7 Toyota in the hands of Jose Maria Lopez finished third, overtaking Louis Deletraz’s #3 Rebellion Racing entry in the final hour that was stuck in the garage while the mechanics repaired crash damage.

It was better news for the other Rebellion Racing car as Norman Nato crossed the line second, splitting the two Toyotas in what was the final Le Mans for the team.

Toyota had entered the race as the overwhelming favourites to take victory. 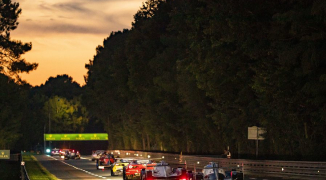 Initially it appeared fortune would favour the #7 car, but the dreams of Lopez, Mike Conway and Kamui Kobayashi were shattered by a turbo failure at 3am.

Repairs took half an hour to complete as the car dropped eight laps behind the sister car.

In LMP2, the #22 United Autosports car of Phil Hanson, Filipe Albuquerque, and pole-sitter Paul di Resta took an impressive victory in the busiest class of the four with 24 participants, with Hanson taking the car to the flag.

In a chaotic final 20 minutes, United Autosports called Hanson into the pits for a quick splash and dash, dropping the entry behind Anthony Davidson’s Jota.

But with only 10 minutes remaining, Davidson himself had to pit for fuel, surrendering the lead. With a comfortable gap back to the third in class Panis Racing entry, Davidson was still able to cross the line second in class.

In the early morning, United Autosports had looked on course for a famous one-two in the LMP2 category, but the #32 car suffered an oil leak and lost an hour in the pits, dropping well out of contention for the podium places.

In the final hour, Jean-Eric Vergne’s #26 G-Drive, that was running third in LMP2, shot off at Indianapolis as Vergne reported over the radio his suspension had broken. The small Panis Racing team inherited the podium position with Matthieu Vaxiviere finishing their race.

James Allen in the #39 Graff, who surprisingly led the LMP2 for the first two hours of the race with a superb drive, clattered into the tyre barrier with 40 minutes to go, throwing away the team’s fifth place in the class.

Alex Lynn took victory for the #97 Aston Martin in the GTE Pro class, holding off James Calado in the #51 AF Corse Ferrari by half a lap while Nicki Thiim finished third for Aston Martin.

The Porsche factory team, who are celebrating the 50th anniversary of their first Le Mans win, could only manage P6 and P7 in the class after being disadvantaged by the balance of performance results.

In GTE Am, the #90 TF Sport of Charlie Eastwood took the win. Matt Campbell in the #77 Proton Porsche finished second, with AF Corse getting another podium place as the #83 car with Nicklas Nielsen finished third.

The race was one of attrition, with 16 of the 59 cars to start the race failing to reach the flag.

As the chequered flag fell on the 24 Hours, so did the flag fall on the LMP era. For 2021, the Hypercar regulations will take hold. Bring it on!