Sebastien Buemi leads for Toyota as the sun begins to rise at the Circuit de la Sarthe.

The #8 Toyota holds a three lap lead over the field but the sister #7 car has dropped to fourth after suffering a turbo problem at around 3:00 am local time.

The setback left the car stranded in the garage for half an hour and saw both Rebellion Racing entries leapfrog the car of Mike Conway, Kamui Kobayashi and Jose Maria Lopez as they #8 went seven laps down on the lead car.

For Rebellion, Bruno Senna sits second in the #1 car, three laps down on the leader with the sister car trailing by a further lap.

In LMP2, pole-sitter Paul di Resta has the lead in the #22 United Autosports car. 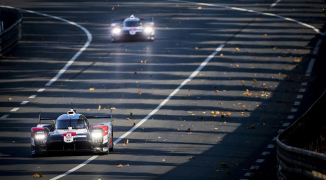 Former F1 drivers tackle Le Mans – who to watch out for

The team had been enjoying a one-two performance, but as the sun began to rise as 6:20am the #32 suffered an oil leak and was consigned to the garage for close to an hour, dropping the entry out of podium contention in the closely fought category.

Roberto Gonzalez is currently in second place for Jota with Mikkel Jensen third for G-Drive.

At around 21:30, the #37 Jackie Chan Racing car was black-flagged from the race as Ho-Pin Tung, who was stranded on the circuit, received a part from the team and fitted it onto the car and continued his race, a cardinal sin at the 24 Hours of Le Mans.

Salih Yoluc leads the GTE Am battle for TF Sports in his Ferrari the Dempsey Proton Racing Porsche of Christian Ried second.

Of the 59 cars that started the race, 10 have retired throughout the night.