Valtteri Bottas struck a key blow in his battle with Mercedes team-mate Lewis Hamilton ahead of qualifying for the British Grand Prix.

With the focus of the final practice session at Silverstone on qualifying simulation, Bottas, who claimed pole last year at this track, finished 0.138secs clear of Hamilton at the end of the 60-minute run.

With air and track temperatures both cooler by 16 degrees centigrade compared to Friday, Mercedes again found its rhythm after appearing to struggle in the heat.

The duo traded fastest laps throughout before Bottas claimed the honours with a time of one minute 25.873s, just 0.032s quicker than the best time from last year’s FP3 session posted by Ferrari‘s Charles Leclerc.

Max Verstappen, in a Red Bull that is at least threatening this weekend compared to its issues a fortnight ago in Hungary, was exactly 0.3s down on Bottas. 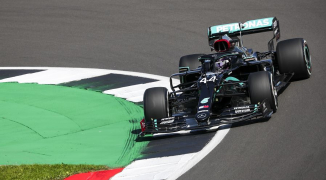 The leading trio were comfortably clear of the remainder of the field, with Racing Point‘s Lance Stroll the best of the rest, with the Candian 0.703s off the pace.

McLaren duo Carlos Sainz and Lando Norris then sandwiched Leclerc in positions five to seven, with the numerous upgrades on the MCL35 performing well.

Renault‘s Daniel Ricciardo and Nico Hulkenberg in the second Racing Point were the only other drivers within a second of Bottas, the latter notably closing the gap to Stroll to three-tenths of a second compared to the six tenths on Friday following his rapid introduction to the team in replacing Sergio Perez.

Alex Albon’s British Grand Prix weekend went from bad to worse as he failed to make it out on track until the final 15 minutes.

Albon had missed the second half of FP2 after crashing into a barrier at Stowe, and although professing < u>” href=”https://www.gpfans.com/en/articles/55026/albon-finally-hooked-up-with-red-bull-despite-tank-slapper-crash/”>to be more “hooked up” with the car this weekend, he would have been eager to get back up and running again ahead of qualifying.

But despite stepping into his RB16 to start the session, an electrical fault was soon spotted, leading to a change of the electrical system. Albon managed nine laps come the conclusion, with his best 1.305s down.

As for Sebastian Vettel, who missed FP1 with a minor fault with the intercooler system and required a pedals change during FP2, he encountered another brake pedal problem in FP3.

The four-time F1 champion has struggled to gain any rhythm with his SF1000 even when he has been on track, and he finished a place behind Albon, 1.378s behind.

Williams‘ Nicholas Latifi continued his trend as he has now been slowest in every session, with the Canadian 2.239s down.