McLaren team principal Andreas Seidl is braced for another tough battle in the Formula 1 midfield.

McLaren finished ‘best of the rest’ in 2019, but, despite leading the midfield charge, the team scored 272-points fewer than third placed Red Bull. The fact that McLaren scored just 145-points only serves to highlight this gap in performance further.

New aerodynamic testing restrictions will come into force in 2021 – a sliding scale granting lower performing teams more wind tunnel time and data than those towards the front of the order – but, even with the delayed start to the 2020 season, Seidl was unequivocal in his response when asked if he could see a power shift this year.

“No,” the German told a media conference call which included GPFans. “To be honest, I don’t think anything has changed in terms of balance of power for this year and also for next year with the way the regulations are now.

“With a huge carry over of this year’s car also into next year, I expect pretty much the same balance of power, or balance of performance between the top three teams and the midfield.” 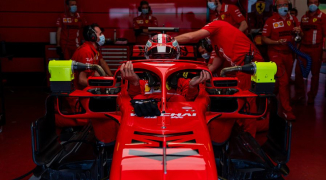 He added: “I think the first time we could see a bit of a shake-up of the field will probably be 2022-23, once the budget cap is washing out and the new regulations are coming in.”

In recent seasons, the battle to be ‘best of the rest’ has often been more exciting than the battles at the front, and Seidl expects a ‘very strong fight’ again. Positive noises have been emanating from Renault and AlphaTauri, while pre-season testing appeared to show that Racing Point had made the biggest gains across the winter with its Mercedes ‘inspired’ RP20.

Vettel: “I’m ready to give it my all” as Ferrari farewell tour begins