Over seventy circuits have hosted Formula 1 Grands Prix, and there is a large split in the opinion between fans over which ones are the best. GPFans writers Sam Hall and Ian Parkes put their heads together and came up their own ultimate top ten.

In creating this list, the criteria considered were the number of iconic moments seen at a circuit, the history of the track and the level of challenge that a circuits presents the driver with.

If ever there was proof a circuit does not require a modern-day mix of corners of varying degrees and speeds to produce thrilling racing, then the Circuit Gilles Villeneuve is it.

Named after Canada’s racing hero, who spent six seasons with Ferrari and who was tragically killed during qualifying for the 1982 Belgian Grand Prix at Zolder at the age of 32, the track is set on semi-permanent roads on the Île Notre-Dame in the middle of the St Lawrence Seaway.

Home to the Canadian Grand Prix since 1978, the simple design features a hairpin, two decent straights, a couple of sharp turns and a chicane that has become home to the ‘Wall of Champions’ where many famous names have ended up crashing. 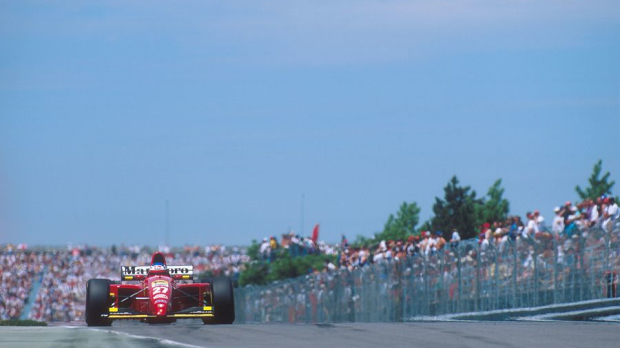 Jean Alesi en route to his only F1 victory – Canada ’95

9. The Circuit of the Americas

The Circuit of the Americas is the newest circuit to figure on this list by some distance. First on the Formula 1 calendar in 2012, the Texan circuit may not have the history of other circuits, but it features due to the pure driving challenge it presents.

Borrowing heavily from Suzuka, Istanbul, Silverstone and others, the steep 133-foot climb from the grid into turn one is something that is truly unique to COTA.

Race starts are often chaotic as a result of the extremely late braking the climb allows for and the sharp turn-11 hairpin onto a kilometre long back straight, again ending with a heavy braking zone, ensure that overtaking never comes at a premium.

Hamilton leads the charge up to turn one

Named after Ferrari’s founder and his son, but more accustomed to simply being known as Imola due to its proximity to the Italian town. Although racing was first staged in 1953, it was not until 1980 that F1 paid a visit.

The circuit initially staged the Italian Grand Prix that year, but after that race returned to its spiritual Monza home, Imola became the venue for the San Marino Grand Prix from 1981 until 2006.

The high-speed nature of the track made it a favourite, but its renowned Tamburello curve drew infamy due to the number of incidents and ultimately led to tragedy with the death in 1994 of Ayrton Senna.

Hockenheim first hosted the German Grand Prix in 1970 before becoming the regular event venue in 1977.

Although many will regard the 2019 German Grand Prix as one of the most entertaining races Formula 1 has ever seen, it is the older version of the circuit that features on this list.

Cars would scream through from the stadium section into the forest, drivers able to max their cars on long straight punctured only by three tricky chicanes. This was Germany’s answer to Monza, and it was every bit as iconic as it’s Italian counterpart.

The Northamptonshire venue has undergone numerous transformations over the years, but it is the one that was reprofiled in 1997 and ran to 3.194miles (5.14km), with Copse and Priory altered to make them quicker, that gets our vote here.

Silverstone has always been a mecca for motorsports fans, from its days after being transformed from an old airfield base, right up to the present day and its attraction of around 350,000 fans across the three days of a race weekend.

The Maggotts-Becketts-Chapel complex of sweeping bends, leading into the Hangar Straight and on into Stowe are long-held favourites with virtually every driver. Its current guise, from 2010, is still exciting, but arguably not as enjoyable for the drivers.

David Coulthard heads through the old Vale complex at Silverstone