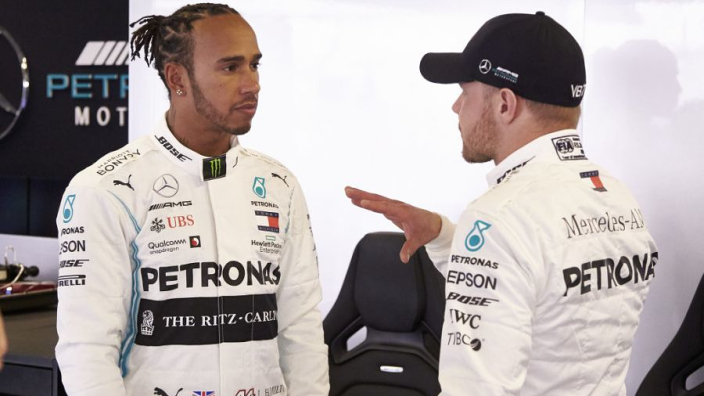 Valtteri Bottas believes there is one final step that he needs to make to be able to regularly overcome Lewis Hamilton in races and put in a legitimate championship challenge – improve his consistency.

The Finn enjoyed the best season of his career in 2019, winning races in Australia, Azerbaijan, Japan, and the United States, but a stretch of 12 events without a victory in the middle of the campaign saw team-mate Hamilton establish a commanding lead in the driver rankings, which led to him winning the title with relative comfort.

Having bettered Hamilton with four wins last year, he knows he can beat the six-time world champion in a one-off race, but it is finding the consistency of doing it over the entire season which will be key in 2020.

“It’s quite clear in my mind,” he said when asked what he needs to do to defeat his team-mate.

“We’re definitely [working] with the engineers and with the team on my development programme.

“Things we’re really focusing on [is] the race week and for my performance that final step I need is consistency.

“Still more adaptability to different circumstances [as well] but the main thing is minimising mistakes.

Brundle: I expected Verstappen or Leclerc to sign for MercedesRead more

“There’s still a lot I feel I can improve. It’s fine details here and there, a lot related to driving style and tyre management. But it’s a whole lot better than last year.”

As well as finding consistency and keeping mistakes to a minimum, he reckons finding the right mentality to overcome setbacks and make sure they don’t happen again will play a role in his performances, too.

“Minimising those mistakes, being able to find [the right] mental state that [means] I will be able to perform at my best every single weekend – that’s the tricky part. Like in any sport,” he continued.

“It feels like I have to dig very deep to find anything more from my side – how I can be a better driver, how I can perform better, how I can work better with engineers.

“It definitely keeps me working hard because it’s just not easy to beat him. And it requires a lot. That’s pushing me on every single day.

“I would really struggle to accept it, that some other driver can do something that I can’t.

“I accept it completely that Lewis won the title [in 2019] because overall during the season he was better than me. He beat me fair and square.

“But I believe there’s always something that I can do better and I can fix those weaknesses. Maybe I’m a bit more stubborn.”