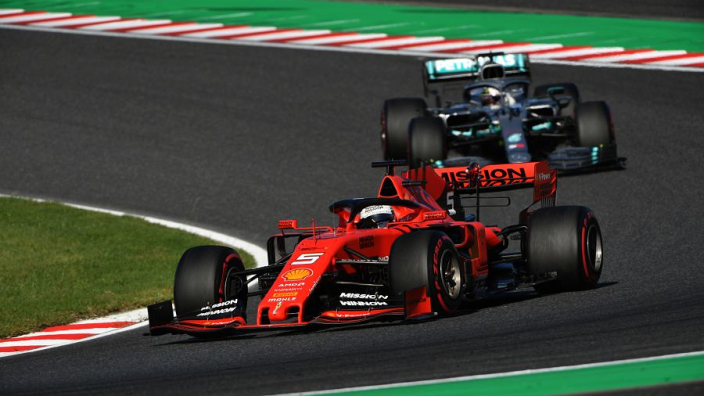 Mattia Binotto says Ferrari have made up 100 bhp from its engine compared to Mercedes over the course of the V6 Hybrid era.

After years of the Silver Arrows dominating the power stakes, Ferrari moved ahead definitively in 2019, with an upgrade introduced after the mid-season break helping Charles Leclerc and Sebastian Vettel share six pole positions in a row.

Binotto has claimed that Mercedes had 80 bhp more than Ferrari at the start of the 2014 season – a campaign in which Fernando Alonso could only manage two podium finishes and Kimi Raikkonen did not take to the rostrum all year.

And put to the team principal that Ferrari’s engine now has a 50 bhp advantage over its rivals, he told Auto Motor und Sport: “The truth is far from this value. We assume a maximum of 20 bhp, which is still a respectable number.

“At a time when the engines are becoming more and more similar, 20 bhp is a big advantage, helping you in qualifying and in the race.

“I am proud of this development. I can still remember the first hybrid year in 2014. The gap to Mercedes was huge.

“We have made tremendous efforts at the factory in Maranello to fill this gap. I have to say that we have done a great job in this field.”

Ferrari’s dominance did not last to the end of the campaign, coinciding with a string of technical directives being issued by the FIA as rivals asked for scrutiny to be put on the Scuderia’s power gains and made direct links between the two events.

“That’s right. But they draw the wrong conclusions,” Binotto said.

“We have not changed the operating conditions of the engines. In order to generate more downforce, the air resistance has increased. Therefore, we are now a bit faster in the corners, but slower on the straights.”