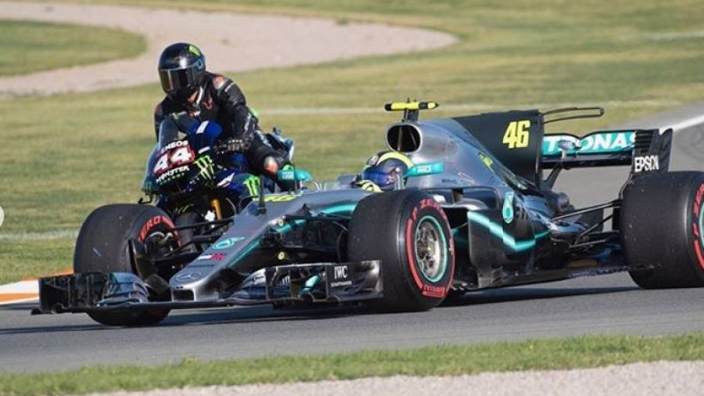 Mercedes say Valentino Rossi proved himself as a “true master” in the way he immediately adapted to driving a Formula 1 car in his ride swap with F1 champion Lewis Hamilton.

Rossi has previously tested a number of Ferrari models, and his latest go in an F1 car came as part of a ride-swap event that saw Hamilton trial his Yamaha MotoGP bike.

It is reported that Rossi spun the Silver Arrow three times in his demo run, while Hamilton also admitted to a minor error while he was on two wheels.

However, Mercedes’ strategy chief James Vowles says Rossi showed plenty of talent in his effort in the title-winning W08.

“Valentino’s approach was very meticulous,” Vowles is quoted by Crash.

“He got the fundamentals right first in terms of getting the car to where he wanted it to be on track and controlling it, and then just intuitively braking later and carrying more speed into the corner, almost like I imagine he does with a MotoGP bike, and it’s very impressive to watch.

“It is really the sign of a true master that he’s not out of control and progressively finding performance.

“Throughout the day, he had areas of strengths. One of them was braking late and carrying speed into the corner, he’s really good at that.

“Give him another day or two in the car, and he will then be on top of the fundamentals plus the tuning of all of that.

“There is a lot of performance to come. In slow-speed corners, as in the exits onto the start-finish straight, there he was very good. Where he was a little bit behind Lewis – and it doesn’t surprise me too much – is high-speed [corners].”