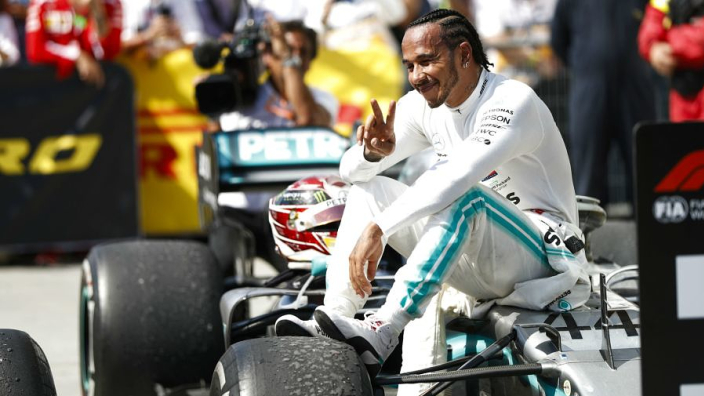 Lewis Hamilton should remain with Mercedes to surpass Michael Schumacher’s Formula 1 records, then join Ferrari to secure his legacy in the sport.

That is the view of former Ferrari driver Gerhard Berger, who says Hamilton should hold off on moving to Maranello for now, amid rumours that the six-time world champion is seeking to join the Scuderia in 2021.

Hamilton can match Schumacher’s all-time record of seven world titles in 2020, and will start the season seven grand prix victories shy of the German great’s tally of 91.

Berger raced in 96 grands prix for Ferrari across two spells in the 1980s and 1990s, scoring five wins including a memorably emotional triumph at Monza in 1988 shortly after the death of team founder Enzo Ferrari.

Ferrari recently confirmed that Hamilton met with new president John Elkann in 2019 and claimed to be “flattered” by the Briton’s interest in a move, but Berger says he should only make the switch once he has reached the loftiest position in F1’s record books.

“For Lewis, I could not recommend to any driver more than if you can at one time in your career take the chance to drive for Ferrari,” he told the Guardian.

“It is an outstanding experience. Driving for Ferrari is very emotionally driven. Some are cold to it, some react very much toward it.

“Me, I was affected very much because I love Ferrari, I loved the Italian mentality, the brand and I think Lewis would. Most of the drivers love it but it has to be right on timing.

“I think he should go to Ferrari but after he has beaten all the records.

“It would be too much to do it before because he has such a phenomenal team around him. You never leave a winning team, so perhaps it is not the right moment to do it now.”