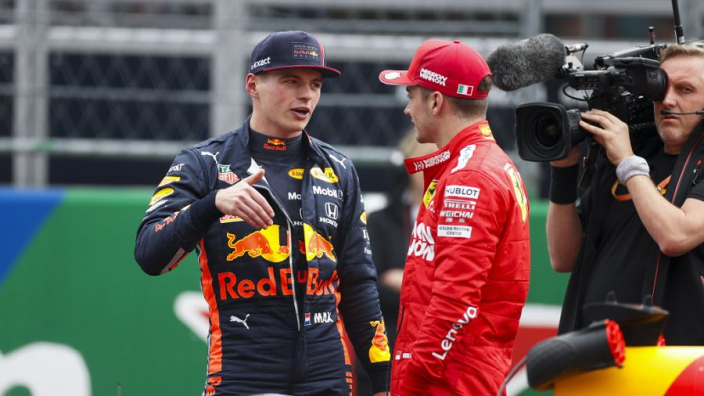 Max Verstappen cannot see himself joining rival Charles Leclerc at Ferrari, but would not rule out a move to Mercedes to partner Lewis Hamilton before the Briton retires.

Verstappen and Leclerc are poised to fight out Formula 1’s next great rivalry, having duelled in their karting careers before going wheel-to-wheel at several races in 2019.

With Leclerc currently battling for supremacy in Ferrari with world champion team-mate Sebastian Vettel, Verstappen does not believe that the Scuderia would want the young rivals next to each other in the team, despite suggestions that Vettel could be replaced by Hamilton in 2021.

Verstappen told Ziggo Sport: “I think that won’t happen anyway. I think that you shouldn’t have two potential number ones driving next to each other.”

Verstappen was much less decisive when asked about partnering Hamilton at Mercedes, however.

He said: “Well, who knows? At the moment I don’t think about this too much.

Although Verstappen has had to hit back at suggestions that he does not value Hamilton’s achievements, the Dutchman does believe that he would have been toasting similar success had he driven for the Silver Arrows.

“I also have the confidence to say that if I would have been in that car, it also would have happened like that,” Verstappen said.

“But he [Hamilton] is certainly very good, absolutely, and he also belongs to the top Formula 1 drivers of all time. But what I wanted to point out was that the car is so dominant that, like I said, sixty percent of the grid [would be victorious in the Mercedes].”