Romain Grosjean believes that the Formula 1 grid needs more teams like Haas, the newest outfit in the paddock.

The American team joined the field in 2016, with Grosjean driving their machine ever since their debut race.

The team has improved year-on-year, and were able to finish P5 in the Constructors Championship this time round.

“Haas is one of the things that make F1 great,” Grosjean said.

“The team is filled with determined goal-setters, out-of-the-box technical thinkers – and yes, even crazy dreamers!

“I’m lucky to be a part of this team. F1 needs more teams like Haas.”

The Frenchman went on to talk about the big three, and how the underdogs do not have a chance.

Outside the top three teams, Sergio Perez was the only man to score a podium finish, doing so in Baku in April.

“F1 can seem like a sport where the underdogs have so little chance, and I know as much as anyone that it can be like that,” Grosjean added.

“There are two or three teams that have the personnel and the budget to have a realistic chance at winning races consistently.

“That’s just the way it is. It’s not good, or bad, it’s just like that. It can make life in the middle a little tricky.”

However, despite the gap between the big boys and the midfield, the Frenchman believes that Haas have what it takes to bridge the gap.

“We know, at Haas, how tough the task is in the next few years if we want to be up there with the big dogs,” he explained.

“But I know this: Gene Haas isn’t in F1 to finish in the middle. And that’s why I’m so excited about our future.

“I’m excited for this winter, for testing, to see the new car. Because I believe in us.”

The story is one most would not believe. Haas, the team who had the most shambolic starts to a Formula 1 entity, now looking at fighting the big boys.

“Our first Grand Prix in Australia in 2016 was chaotic,” Grosjean admitted.

“We didn’t get a lot of laps in pre-season testing so we had barely any info on the car going into Melbourne.

“Then it rained on Friday, so no laps. We didn’t even know if the radio worked!

“On Saturday, we finally got out of the garage and someone hit us in the pit lane. We had to change the floor of the car and we missed even more time.”

The new qualifying style meant that Haas did not last long on Saturday afternoon, either. But then, neither did the qualifying system.

“Then qualifying was a disaster because F1 had implemented that new, ridiculous elimination-style quali that ended up getting removed a few weeks later, he said. 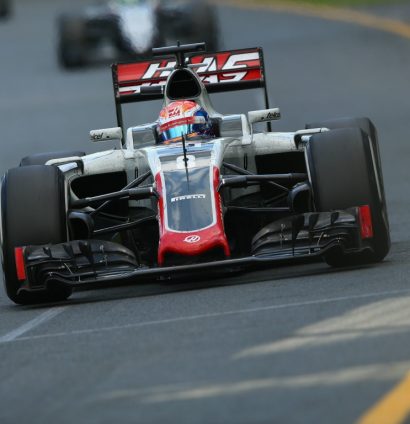 “But then Sunday happened. And the race ended, and we were in sixth place. P6. In the points. Unbelievable. Truly amazing.

“When I look back on my career, I’ll think of that day right away. I love that story. I loved that weekend.”