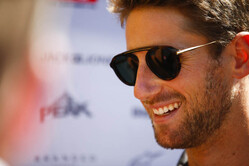 An F3 Euroseries champion, when Romain Grosjean entered F1 with Renault in 2009, there was no doubting his speed or his potential, only his ‘red mist’ issues, particularly at the start of races.

Devastated to lose the Renault seat at season end to former Addax (GP2) teammate Vitaly Petrov, Grosjean reveals that he seriously considered dropping motorsport in favour of the other love of his life, cookery, but finding himself thwarted from the outset, returned to racing, finally securing an F1 rise with Lotus.

“I was expecting to get a seat with the team (Renault) going into the 2010 season,” says Grosjean n a piece penned for The Players Tribune. “I felt I had raced well. I felt I was on the right trajectory. But, and you might know this, the politics in F1 are quite… prevalent, let’s say.

“I tried to keep to myself as a rookie, to lay low. But then I heard I was ‘arrogant’ and I had a ‘big ego’. The thing is, that just wasn’t true. I was just shy. I was just me! So some people didn’t like me I guess, and on January 31st, I got a call from Eric Boullier. He said: ‘Romain, I am sorry to say this, but yes, we have signed Vitaly Petrov to the seat for this season.’ I hung up the phone, thinking my F1 career was over. And right away, I began to pack.

“The thing about me is, I’m all or nothing,” he admits. “So when I got off the phone with Eric, F1 for me was no longer all… it was just nothing. And if I didn’t have a ride in F1, then where did I go next?

“I was a bit more of a dreamer, as you know, back then, than I am now. But I believed in myself. And I believed in myself so much that I thought that I was going to be able to change careers that day. I caught a train from Geneva to Paris. I called my girlfriend, now my wife, to let her know that I was coming to visit her. And that I had some news about my career. I was going to be a chef. Yes, a chef.

“I grew up loving food. I watched my mom cook great meals in our family home. I can still remember the smells of the cheeses in our kitchen, the tastes of the chocolate for dessert. And also, chocolate is my religion. Put that on a T-shirt.

“Unfortunately, or perhaps fortunately, it never got to that point. I did actually go to cooking school in Paris. Like I physically went to the building. But they didn’t even let me sign up. Can you believe that? I was told I was too old. Too old! I was 24! So that was that. No cooking.”

Out of F1, Grosjean subsequently secured a drive in the inaugural FIA GT1 World Championship with Matech Competition, and later that year contested the Le Mans 24-Hours. He also contested a few rounds of the Auto GP series, taking 4 wins along the way, while also contesting the second half of the GP2 series – in which he had raced in 2008 and early 2009 before his move to F1 – with DAMS. Remaining in GP2 in 2011 he won the title, and was subsequently confirmed as Kimi Raikkonen‘s teammate at Lotus for 2012.

Clearly very quick, the Frenchman however was involved in more than his fair share of incidents, and after causing a start-line crash at Spa, which could have cost the life of Fernando Alonso, Grosjean became the first driver to receive a race ban since Michael Schumacher in 1994.

Aware that there was a problem, the Frenchman subsequently sought the services of a sports psychologist.

“I wanted a win so badly,” he admits. “I believed it was possible, our whole team did. I was pushing too hard, too early, and I had been making a few mistakes on a couple of opening laps that year. In Spa, I needed a really good start. I drove beyond the limits. It lead to that first lap incident, and I paid the price. It was a difficult weekend. I was all over the place, mentally, for a few days. I couldn’t think straight – I couldn’t think about getting in the car again.

“Above everything else, I’m glad nobody was hurt. I learned a lesson – a big one – that day: An F1 race is not a sprint, it’s a marathon.

“I was introduced to a sports psychologist in Paris a few months before the race in Spa, and I began meeting with her regularly after the grand prix – and I haven’t stopped since. Our sessions have changed my career and my life, without a doubt. F1 is such a heady sport. As drivers, we’re so isolated and mistakes we make impact a team that consists of hundreds of people across the world.