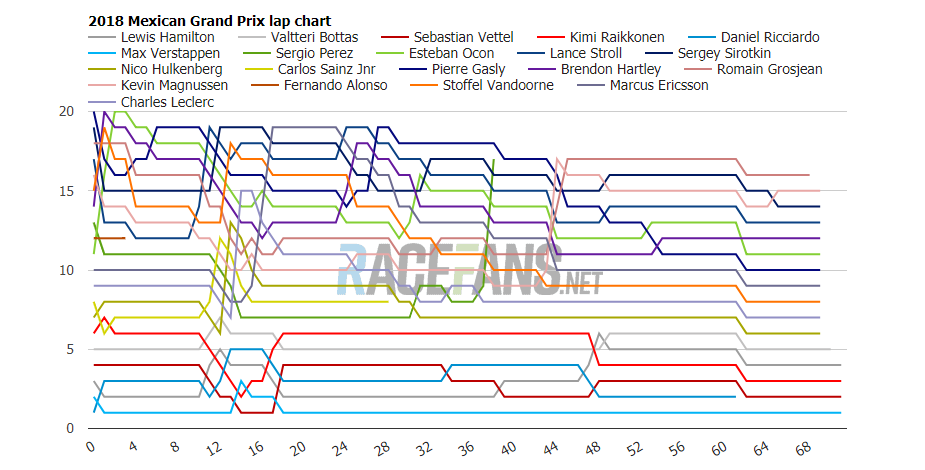 For only the third time this year the race winner made two pit stops instead of one. However Red Bull said Max Verstappen’s second stop was only precautionary and he could have gone the distance on his second set of tyres.

Red Bull were on course for a one-two finish until Daniel Ricciardo’s car failed – for the eighth time this year – on the 62nd lap of the race. He was on course to complete the race on a one-stop strategy.

Although Mercedes set the fastest lap of the race, courtesy of Valtteri Bottas’s 1’18.741 on hyper-softs with six laps to go, the team struggled dreadfully with their tyres. Bottas pitted three times – highly unusual in 2018 – and sampled all three compounds as he tried in vain to find one which would work with his W09.

Had it not been for Ricciardo’s late retirement, both drivers would have finished lower than they started for the second race in a row. Lewis Hamilton’s eighth place on the fastest lap table gives a better illustration of how competitive they were.

The biggest climber of the race was Pierre Gasly, who made up 10 places from last on the grid to claim the final point.

The positions of each driver on every lap. Click name to highlight, right-click to reset. Toggle drivers using controls below:

The gaps between each driver on every lap compared to the leader’s average lap time. Very large gaps omitted. Scroll to zoom, drag to pan and right-click to reset. Toggle drivers using controls below:

All the lap times by the drivers (in seconds, very slow laps excluded). Scroll to zoom, drag to pan and toggle drivers using the control below:

The tyre strategies for each driver: