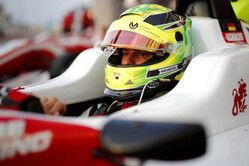 In early 2015, as Mick Schumacher prepared to make the switch from karts to single-seaters, his manager Sabine Kehm, called on the media not to pressurise the youngster and to be “realistic with expectations”.

“This is Mick’s very first year in a formula series,” she said in a brief statement. “He has to learn a lot of new things and make a lot of new experiences because the difference between karting and formula cars is quite big.

“Give him time,” she continued, “don’t over-react in terms of expectations and just have him go step by step. Of course he will try and do his very best but he also has to learn a lot. This is really just the start of it.”

Indeed, such was the sense of unrealistic expectation and pressure from the media, the youngster had previously raced as Mick Betsch, using his mother Corinna’s maiden name.

Days after Ms Kehm’s request, Mick won on his F4 race weekend debut, the 16-year-old finishing ahead of teammate Joey Mawson at at Oschersleben.

Finishing the season tenth overall, in 2016 Schumacher continued in the German F4 championship in addition to the Italian championship, finishing runner-up in both as well as third overall in the MRF Challenge Formula 2000.

Moving up to the European F3 championship in 2017 with Prema, with whom he had raced in the previous year’s German and Italian F4 series, Schumacher had an altogether more difficult time, only once visiting the podium.

Remaining in the European F3 championship, other than a brace of thirds, at the Hungaroring and Zandvoort, this season appeared to be going the same way, until the youngster scored a maiden win at Spa.

This was soon followed by further wins at Silverstone and Misano, and then an epic weekend at the Nurburgring which saw the German win all three races, thereby moving up to second in the championship.

Inevitably, his domination of the Nurburgring weekend was raised in the F1 paddock just days later. Winning the F3 championship would automatically qualify Schumacher for a superlicence, so naturally, in Singapore, Ferrari boss Maurizio Arrivabene was asked if one day Mick might follow in his father’s footsteps at Maranello.

“The most important thing is to let him grow without giving pressure,” said the Italian. “The recent results were very, very good and I wish to him a great career.

“With a name like this, that wrote the historical pages of the Ferrari history, I think the door at Maranello is always open of course,” he added, “but without burning the step, that is, a Schumacher family decision but let the guys have fun.

“I always repeat this, being focused, concentrated but at the same time have fun and to grow up slowly but certainly. Then we will see about the future. How can you say no, in Maranello, to a name like this?”

A win in atrocious conditions on Friday saw the youngster take the lead in the championship, with a win in Race 2 extending it, and whether or not he goes on to win the title, it is clear that Schumacher Jnr has talent and though team bosses will continue to play things down, all will be aware just how much the Schumacher name could be worth to the sport.