1966
The first Formula One world champion Nino Farina died in a road accident while driving to the French Grand Prix. His career spanned three decades, during which he was involved in his fair share of serious racing accidents, making his death

after his retirement tragically ironic. His one and only championship victory was a close-fought thing, and he came to the final race at Monza behind both his Alfa Romeo team-mates Juan Manuel Fangio and Luigi Fagioli on points. However, he was driving a newer version of the car than Fagioli, and once Fangio’s gearbox seized, the road was clear for Farina to win the championship. His career came to a slow and gruelling end after a couple of big crashes at the start of the 1954 season. He returned in 1955 but was in such pain he had to dose himself with morphine. He continued to race in sports cars and the Indy 500 for another couple of years before he retired for good.

1975
Ralf Schumacher was born in Hürth-Hermülheim near Cologne, Germany. Like older brother Michael, Ralf started racing on his parents’ go-kart track in their home town of Kerpen from an early age and he graduated from karts to Formula 3 in 1995. Great things were expected of Ralf when he moved to Formula One with Jordan in 1997 on the back of winning the Japanese Formula Nippon series but he never managed to step out from the shadow of his illustrious brother despite glimpses of brilliance. It was in 2001 when Ralf emerged as a possible future champion, taking his first three Grand Prix wins at Imola, Montreal and Hockenheim. Further wins followed in Malaysia in 2002 and at the European and French Grands Prix in 2003 but that was to be the highlight of a career that followed a downward spiral after a lucrative but unrewarding move to Toyota in 2005. Two years later, he retired from Formula One to take up a career in DTM racing. 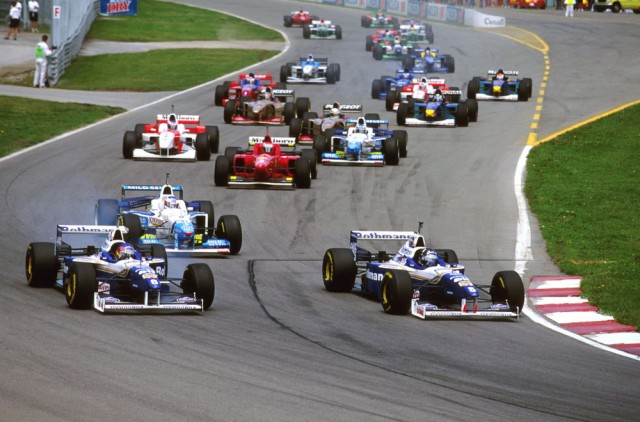 1996
Damon Hill led home team-mate Jacques Villeneuve for a Williams 1-2 at the French Grand Prix. The result marked the fourth Williams 1-2 of the year and made it all but impossible for Michael Schumacher to win the championship during his first season as a Ferrari driver after the German’s engine exploded on the parade lap.

1963
Jim Clark won the French Grand Prix at Reims in his Lotus-Climax from Tony Maggs’ Cooper-Climax and Graham Hill’s BRM. The race began in chaotic fashion when the local officials decided that Hill, who had stalled on the grid, could start from his usual position rather than at the back of the field. The starter then bizarrely gave the signal to race using a red flag. But Clark was unduly worried by events and dominated from start to finish to win by over a minute.